Teams with all female founders receive 4% of venture capital investment whereas all male teams receive 84%, according to Plum Alley research into the latest data from 2014.

The oft cited Babson Study “Women Entrepreneurs 2014: Bridging the Gender Gap in Venture Capital” is a well quoted and important work, but its data is from 2011-2013. We wanted to know what happened in 2014.

Furthermore, the devil is in the details. The Babson Study and other studies use definitions like "executive team" to include different levels of administrative roles, which can sometimes mask the real role of women in the firm. The Babson study reports that: “The amount of early-stage investment in companies with a woman on the executive team has tripled to 15% from 5% in the last 15 years.” But then, there is a footnote. The footnote explains that during that fifteen year period, the definition of executive team changed from including three positions to including as many as twenty. Could this broadening of the scope account for the reported rise of women executives? The footnote even claims: “this definition may have resulted in slightly higher numbers.”

In venture capital firms, a woman who commits the firm's capital plays a leading role. This is very different from a woman who holds an internal administrative position, even if both are “executive.”

The first thing we wanted to focus on were companies that were founded by all male and all female teams. Single gender teams are an important distinction because even a company with one female founder out of six can feel a bit lopsided and, in some cases, like tokenism.

We embarked upon hours of research over several weeks to figure out the gender breakdown of founders who received venture capital in 2014. We limited our research to the companies funded by the top 15 early stage venture capital firms, which are determined by the Entrepreneur VC 100 List. Except for two firms that do not have public data, we used available information from the top VC firms’ websites to find out what companies they invested.

We then researched all of the over 1,000 ventures for ones that received investment at Series A and/or Seed funding stages. In order to keep the data as current as possible, we filtered through and eliminated companies that have gone public or have been acquired. This left us with a total of 595 companies funded by the top 15 VC firms.

For these 595, we used their websites to record the gender of their founders. We then cross checked this information with the industry-standard directory CrunchBase, or other news sources when data on CrunchBase was nonexistent.

The results are startling. In 2014, of all the companies funded by the top VCs, 84% had all male founders and only 4% had all female founding teams. The remaining 12-13% of companies had diverse teams with at least one woman founder. 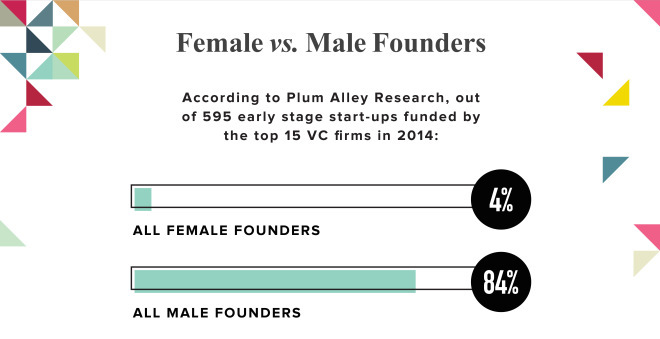 There has been much that has been written about why and how gender disparity exists, but that is beyond the scope of our research. However, we all know the implications of these dire numbers. Disparity in early stages of funding disadvantages talented women who have killer ideas. It hurts their morale and motivation because they know raising money is an unfair playing field, and they will have to climb the entrepreneurial mountain with fewer chances for capital success. The disparity in capital negatively affects innovation, our economy and our culture. And, despite overwhelming data that proves diverse teams perform better in business, product creation and solving our biggest problems, women and other groups remain at a disadvantage.

This research motivates us to work even harder to offer new ways to ameliorate this disparity.  But in the meantime, the numbers speak loudly.

It's time to renew your Plum Alley membership. Thank you for all of your support having now been a member for more than a year.

We now have three levels of membership all designed around feedback from members like you.